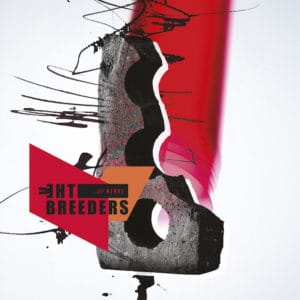 The Breeders All Nerve

Kim Deal, the former bassist of the Pixies and primary guitarist/songwriter of the Breeders, has been the sole constant through numerous Breeders lineups over three decades. Here, what many consider the core Breeders roster—Kim’s twin sister Kelley Deal on guitar, Josephine Wiggs on bass, and drummer Jim Macpherson—reunites. The band responsible for the Breeders’ largest commercial success, 1993’s Last Splash, captures the scrappy, scruffed-up, and tossed-off feel of 90s alt-rock.

Nostalgia, they say, can be a trap, forcing one to romanticize the past rather than live in the present. And while much of All Nerve could be labeled as 90s fetishizing, complete with a song about a serial killer (see also Marilyn Manson, Seven, Silence of the Lambs), there are just enough dark edges to make the album a work of modern, grown-up cynicism. All Nerve, then, barely avoids the nostalgia trap, as it represents a chance to remember the 90s but not live in them.

All Nerve opens with a killer of a song. “Nervous Mary” toys with all the loud/soft dynamics for which Kim Deal’s bands are known, and the guitars of the Deal sisters create a tense, jagged anger. Their voices harmonize, and then drift apart. “Nervous Mary had a nervous day,” sings Kim, and though the cause of the anxiety remains a mystery, we’re left with a terse run-down of daily angst, where the songs—and, well, everything—feels just out of sync. The next song, “Wait in the Car,” gets even bolder, with Kim slamming herself for always making mistakes. Bonus: The self-depreciation comes with a bit of wit, as Kim sings “meow meow meow” while guitars constantly hit the gas and slam on the breaks.

While the album is brisk—11 songs in about 34 minutes—this reformed edition of the Breeders eventually runs out of steam. “Spacewoman” slows things down to play with bass atmospherics but lacks memorable hooks and enough weirdness to stand out. “Walking with a Killer” puts us inside the mind of a soon-to-be victim, but the throbbing rhythm fails to elicit more than morbid curiosity. Worse, “MetaGoth” feels repetitively vague.

Not all is lost, however. Things pick up with the peppy “Archangel’s Thunderbird,” boasting a late breakdown where the guitars swing like axes. “Dawn: Making an Effort” stretches out until the notes become little more than dreamy fuzz. “Rally,” sings Kim, turning in a beautiful moment. It’s also an indication that this Breeders lineup may just be beginning to get reacquainted with one another.

The relatively stripped-down aesthetic of the arrangements extends to the sonics, afforded pleasant balance and decent separation. Kim’s vocals are unmistakably present and clear. That said, Macpherson’s drums sound overly dry and distant, and the bass longs for definition on par with the quietness of the Pallas-pressed LP.