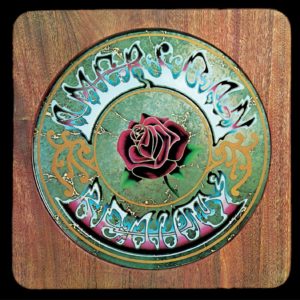 Johnny Cash and Bob Dylan singing together on Nashville Skyline. Along with Dylan’s work with the Band, that sublime effort opened the door and let in the Dead.

Wondering what went wrong. American Beauty made many Americans feel like things were looking up. The country had moved beyond Altamont and Charlie Manson, and Watergate was not yet imaginable. The promise of the 60s looked revived for a few brief moments.

Bits and pieces would fit into something offbeat like Terry Zwigoff’s Ghost World, and equally in something more sentimental like a John Ford Western.

The Grateful Dead remains one of those bands people tend to either love or dislike—few music lovers are indifferent. Having spent the last 30 years living in the heart of Dead country in Marin County, California, I know true fans largely recoil at the idea of elevating a studio album over any number of extended Dick’s Picks jams. American Beauty is the Dead album, however, I’d carry out of a fire.

Recorded right after Workingman’s Dead in 1970—and improving on that set’s ensemble playing, magnificent lyrics, and instrumental work—it takes the band’s roots and country developments up several notches. In addition, the Wally Heider Studios recording offers a step up in recording quality. And the Stanley Mouse artwork reigns as one of the all-time great LP covers. Inside and out, then, a great album—and the song “Truckin’” an earworm impossible to shed.

Rhino spares nothing on this reissue. The heavy cardboard cover and beautiful Mouse reproduction proves there is still an appetite for real album art that does not disappear when you power down your computer. Chris Bellman’s mastering is equally sublime, with a perfect soundstage and excellent dynamic range—better by a significant margin than the green-label original. This edition is bested only by Mobile Fidelity’s 45RPM 2LP pressing, spread across two records and housed in a gatefold sleeve. It sounds very close to the Rhino LP but claims a slightly deeper soundstage.

Other Reviewed Albums By Grateful Dead