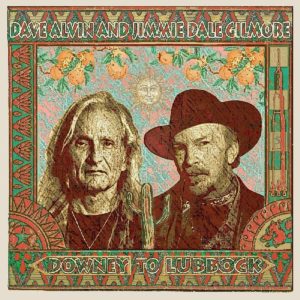 I think of the Blasters, X, and Los Lobos and the rest of the 80s LA roots rock movement crossed with second-generation Austin, Texas-based cosmic cowboys such as Joe Ely, Butch Hancock, and Jimmie Dale Gilmore.

Riding in a convertible in the California desert or tucking into a bursting Cal-Mexican burrito in Los Angeles—or a steaming plate of Migas at Guero’s in Austin.

A remake of Streets of Fire (with Diane Lane, please!).

Musical chemistry between players can never be forced. What looks like a sure thing, a genius combination bound to throw sparks, often proves less compelling in person. Here, a dream pairing of simpatico old friends—former Blaster and X guitarist Dave Alvin and one-time Flatlander Jimmie Dale Gilmore—could easily have spiraled down into a dreary guitar pull. But add a canny selection of spot-on covers, a talented band, and an easy rapport between these two prodigiously talented singer/songwriters, and an unlikely triumph emerges.

Perhaps the biggest surprise is the way in which the voices—Alvin’s resonant, lonesome baritone and Gilmore’s nasally but evocative West Texas drawl, both of which exchange verses rather than sing harmonies—add such atmosphere to each other. In a swingin’, down-in-the-groove rendition of “Stealin’, Stealin’,” the duo trades choruses with glee, in the process producing a truly memorable performance of an overly familiar jug-band standard most memorably covered by the Grateful Dead on its debut album.

Another key to making the four sides of the 2LP set work stems from the decision to make Downey to Lubbock a band rather than a duo record. Veterans like drummer Don Heffington and Van Dyke Parks on accordion add appealing textures and tones. Alvin’s electric guitar occasionally roars, adding a rockin’ edge to another Memphis Jug Band/Grateful Dead favorite, “K.C. Moan.”

While Alvin contributes one new song, “Billy The Kid and Geronimo,” the co-written title track is where the story of the album and the pair’s longtime friendship gets told. In the lyrics, Alvin tags himself as “wild blues blaster” whose “loud Stratocaster” has the power to “blow any roadhouse down,” while in one of his verses, Gilmore identifies as an “old flatlander from the great high plains” and a “hippie country singer.” They conclude that while the proverbial road does not go on forever, friendship is eternal.

A spirited success, one that gets better the more you listen, Downey to Lubbock is at its best in a tune such as the cover of Lightnin’ Hopkins “Buddy Brown’s Blues.” Here, Gilmore’s Texas heritage and Alvin’s deep understanding of the blues blend into a potent re-imagining that starts slow but revs up—complete with Alvin’s loud, edgy soloing and Jeff Turner’s honking saxophone. Gilmore practically shouts out Hopkins’ classic closing lines, “I’m gonna get up every morning and do like Buddy Brown/I’m gonna go and eat my breakfast and then I’m gonna lay back down.” The track is followed by a cover of “The Gardens,” Alvin’s tribute to this friend, the late Chris Gaffney. Gilmore salutes another recent passing with his slow, heartfelt cover of Steve Young’s “Silverlake.”

Oddly, the two best-known covers here are the only risks that don’t always bear fruit. Gilmore’s enthusiastic cover of the Youngbloods’ eternal “Get Together” contributes little new to the song’s history. And no matter how much he loves it, Gilmore’s howling rendition of the Lloyd Price classic “Lawdy Miss Clawdy” may be a tune too far for his voice, which comes off raw and a bit too ragged.

Fittingly, this joint celebration of American roots music closes with a pair of tunes by two of America’s most essential and elemental songwriters. Gilmore teases the pathos out of Woody Guthrie’s “Deportee—Plane Wreck at Los Gatos” and Alvin tears into a snappy piano-led version of Brownie McGhee’s “Walk On” that trails off in another just-right rave-up. This session between two wise pros sounds and feels just right.

Downey to Lubbock takes no chances when to comes to artwork, and emerges as an instant classic thanks to Mekons veteran Jon Langford’s cover-art portrait of Gilmore and Alvin, pictured mid-torso high, and washed in Langford’s sepia-toned signature style. The cover artwork is also available as a separate print available for framing. The gatefold jacket is standard-weight coated stock with liner notes inside by Gilmore, Alvin, and longtime fan and former Warner Bros publicist Bill Bentley. A single-sheet insert of in-the-studio-photos and credits for each song also comes standard. My copy of the LP lays flat, sounds reasonably quiet, and has no major defects.