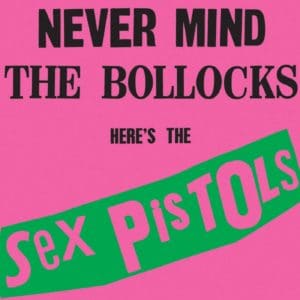 “Never mind the bollocks” is a British working-class taunt that essentially means “quit talking rubbish.” Sex Pistols guitarist and bass player Steve Jones picked up the expression from a couple of street kids, and it serves as an exemplary distillation of the band’s ethos in 1977 when Britain’s ruling class and bourgeois institutions were so bankrupt that even chaos presented a better alternative. It also captures the frustration faced at the time by thousands of out-of-work kids in the U.K.

1977 was also the year Fleetwood Mac dropped its highly polished Rumours album and a year after Barbra Streisand took her turn in A Star Is Born. It wasn’t exactly the landscape for pimple-faced, foul-mouthed, audience-abusing cockney boys. American TV audiences were scandalized by the band’s disrespectful interviews. Columnists wrung their hands over the decline of western civilization, pointing to how much the Sex Pistols resembled the hooligans in A Clockwork Orange. But the music resonated with pockets of music lovers who were bored to death with corporate radio rotation and exasperated by a sense of cultural stagnation. Never Mind the Bollocks came on as an ideal antidote for the great American malaise, inspiring countless DIY punk bands while changing the course of rock n’ roll.

The Sex Pistols were by no means the world’s first punk band. Such credit can be spread around among artists like the New York-based Ramones and their Detroit-reared proto-punk inspirations, the MC5 and Iggy and the Stooges. Even the Sex Pistols’ spiked hair and safety pins were cribbed from New York rocker Richard Hell. So why does the quartet’s debut get so much attention? Well, nothing that came before it matches the explosive, concentrated shot of pent-up rage that erupts when the needle drops on “Anarchy in the UK.” Jones’ swelling power chords lift John Lydon and his sarcastic chortle into the air and then down on top of the audience like a crashing wave. Paul Cook’s thundering drum rolls and Glen Matlock’s throbbing bass lines provide the rocket-fueled momentum that places the track among the most uncompromising songs in the rock canon. Lydon’s bratty snarl and Jones’ relentlessly tight, chugging guitar function as razor-sharp swords on cuts that lambast the music industry (“EMI”) and challenge governmental structures (“Holidays in the Sun” and “God Save the Queen”). Producers Chris Thomas and Bill Price also deserve considerable props for overcoming famously chaotic recording conditions. Their judicious use of overdubs and echo tricks camouflaged the sessions’ numerous technical flaws without sacrificing the band’s raw energy.

It might seem silly to some to consider the finer aspects of sound quality when discussing a seminal punk record, but theproducers labored over Never Mind the Bollocks. Thomas applied his considerable credentials (The Beatles, Pink Floyd, Roxy Music, Badfinger) to ensure the record would reach out and grab listeners. Sadly, the Rhino Records/Warner Brothers remaster conveys few of his goals. By cleaning up Lydon’s vocals and removing every single bit of grit and grime from the proceedings, the reissue doubles as a shrill, headache-inducing torture device. The sonics here cut the record’s low-end bollocks clean off. Compared to the appropriately grungy, roiling energy heard on the 1977 U.S. pressing, the 2016 remaster sounds like a flat, antiseptic MP3 emanating from cheap micro speakers. The red-label 1978 U.K. repress on Virgin sounds decidedly less muddy than the U.S. version yet still manages to preserve the original recording’s bass and midrange impact. So never mind buying this bungled reissue. Even the mid-80s compact disc sounds closer to the real thing.