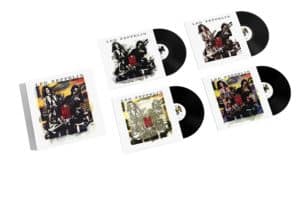 Aside from the obvious references to the original blues influences, the live music here shouts meaty, big, and bouncy 70s rock all day long.

Free of producer constraints and any temptation to be perfect in the recording studio, live albums offer artists permission to let loose and show off their vibrant personalities. In that spirit, How the West Was Wonis made for celebrating the end of an irritating work day or spinning while daydreaming about what it must’ve been like to spend one’s days as an untouchable rock god during the era of the Hyatt House.

Sub in any of these performances during scenes when the fictional band Stillwater plays onstage in Almost Famous.

How the West Was Won: The title alone hints at the confidence, bombast, and triumph that mark Led Zeppelin’s live performances from the L.A. Forum and Long Beach Arena in late June 1972—they shows that comprise an archival treasure that trounces the band’s only other official concert album, the highly flawed The Song Remains the Same. Even when taking into account all the myth-making, chest-puffing, tall-tale-telling, and outlandish histories that frame the quartet’s legacy, the music here justifies the bustle.

Issued in 2003 on CD and DVD-A (remember those?), How the West Was Woncaptures the band touring after releasing Led Zeppelin IVand before making Houses of the Holy—prime time by anyone’s standards, including those of guitarist Jimmy Page, who in a 2010 interview stated the period “is pretty much a testament of how good it was.” Indeed, the maddening inconsistencies, be they Page’s erratic playing or wear on Robert Plant’s voice, that later plagued some of the group’s outings—deficiencies and concerts exhaustively noted in forums discussing bootlegged recordings—are nowhere to be found. Completists may decry the absence of a few songs performed those two summer nights in California, yet beggars cannot be choosers. Short of a handful of unauthorized recordings, Led Zeppelin’s chemistry and hammer-of-the-gods prowess don’t come any better.

Of course, as with most reissues connected to mammothly influential and eternally beloved artists, the vinyl version of How the West Was Woncourts a bit of controversy. For reasons unknown but likely related to liscensing, the “Whole Lotta Love” medley here omits the quartet’s brief run through Gene Pitney’s “Hello Mary Lou” that appears on the digital editions. However vexing, the exclusion fails to spoil a party that witnesses Led Zeppelin enjoying a let-your-hair-down freedom occasionally missing from its more buttoned-down studio affairs. Witness Page running a gamut of approaches and styles on a 25-minute “Dazed and Confused,” Plant striving for high-frequency extremes during “Black Dog,” and bassist John Paul Jones responding to the dangerous ess curves on a rollicking “Rock and Roll” that threatens to veer of course. Then again, drummer John Bonham would be there even if a song did lose its bearings. His mélange of brute-force power, ballroom swing, and sixth-sense pacing remains reason alone to tune into every note and marvel at the eight-handed hydra that was Led Zeppelin.

John Davis, under Page’s supervision, remastered the audio for the analog box set. Akin to Atlantic’s 2014 reissues of the band’s studio titles, the bass at times feels overwhelming even as its punchiness serves the immediacy and ambiance of the live settings. Instrumental separation, as well as the architecture of Page’s riffs and breadth of Plant’s voice, emerges with a convincing degree of realism and panache. The record surfaces are pleasingly quiet.

Listeners that own the rather good-sounding DVD-A—and still have a universal disc player—may not be compelled to buy the record again. If they pass, they’ll sacrifice some warmth, soulfulness, and a je ne sais quoi energy that sounds better on vinyl. The 4LP set’s packaging, too, with high-gloss individual sleeves and archival-quality inserts, tops the flimsy construction of its out-of-print digital counterpart.